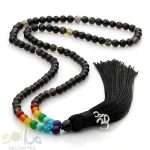 JAPAMALA BUDDHIST STONES CHAKRAS AND BLACK AGATE
Rated 0 out of 5
€21.50 Add to cart 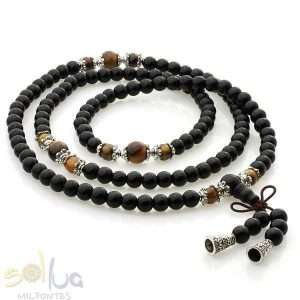 Japamala helps to decrease tension, anxiety, fear, and achieve higher levels of consciousness and spiritual fulfillment. The use of japamalas increases happiness and meditation capacity. This meditative method gives more focus and greater determination to those who use it.

Only 1 items left in stock!

Japamala is a bead string used in Indian meditation practices to tell mantras, desires, intentions or just prayers of those who handle the object. In the Catholic religion, for example, the object is similar to the thirds.

The word “japa” means to pray, to whisper, while “suitcase” means rosary, cord. Despite the variety of forms of use of Japamala, it is considered a sacred object in different religions.

Japamala always has 108 accounts. This number, in Indian culture, has an important and quite powerful meaning. The first is that there are 108 letters in the Sanskrit alphabet. Likewise, the goddess Krishna of Hinduism has 108 different names.

Agates are crystals that harmonize yin and yang energy, and are correlated with creativity and expression of personal truth. The black agate protects and fights negative energies. The crystals of the chakras aim to align and harmonize them.